A genetic condition, wherein all the growth sutures of the skull are fused prematurely, leading to a small skull and to a severe deficiency of the midface. It is corrected by advancing the front of the skull and later advancing the entire face including the eyes and nose to make for a normal appearance. All this can be done in a single operation, and the entire process completed on the same day itself. 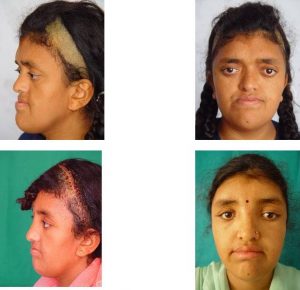 Sometimes the degree of the deformity or deficiency is so severe that it cannot be corrected in a single session. Here a very innovative technique called Distraction Osteogenesis is used to move the bones of the skull or face forward at the rate of 1 mm a day using special mechanical devices. One can practically grow the bone by as many centimetres as required and along with it , other structures like nerves and muscles also grow , thus completing the formation of a normal facial structure.

In Treacher Collin Syndrome, the lower jaw is so deficient that the child is unable to breathe right from the day of birth. This often necessitates making a hole in the trachea and allowing the child to breathe through that for several years until the jaw grows to a reasonable size, but using distraction osteogenesis, one can actually grow the bone right from day one , such that the child can breath normally in less than a month after the procedure. 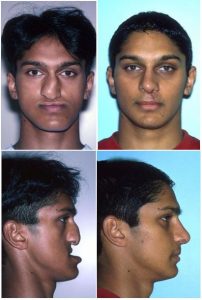 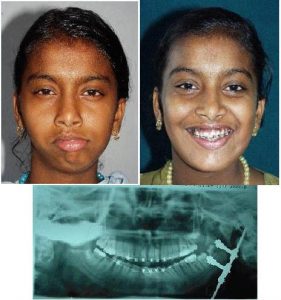