The nose being the central structure of the face is the first thing that one notices. It is the only structure where the rules of  beauty are  so variable. For e.g. When we apply make up, We adorn the eyes and lips to enhance their beauty, but the nose is left to stand on its own, and be less visible. An obviously visible nose is more likely to be a disproportionate nose, which is either too small or too big or too bulbous, thus attracting the first glance of any bystander. In order for the nose to be attractive, and yet not dominate the face, It has to be well defined, straight, symmetrical and in proportion with the rest of the face.

The nose is the primary organ of breathing and any disturbance in its form (too small, too crooked etc leads to a difficulty in breathing as well). Thus function and beauty go hand in hand when it concerns the nose. No two noses are the same and are uniquely shaped to fit the character of the person on whom it sits. So it is natural for one to be concerned about the shape and size of the nose.

Structurally, the nose gets its shape by a combination of  bone in the upper third of the nose and 2 sets of cartilages( strong but flexible structures ) in the lower 2 thirds, and supported from the  inside by a central structure called the nasal septum which divides the nose in to a right and left nostril. All these structures are draped by the skin which may be very thin and unblemished or thick and oily (especially in Indians). Thick and oily skin is due the excessively active sebaceous (oil producing glands), which can lead to acne.

In regards to cosmetics, it’s important to understand the nose for a layman’s point of view. In general the nose can be divided in to 3 separate units. The cleft nose is asymmetry in disharmony.  The nose presents with prominent ptosis, obviously bent septum sustained as a result of a previous minor injury or failure to correct the septal deformity during the primary lip repair leading to, on and off difficulty in breathing especially on one side of the nose. The lower lateral cartilage is collapsed due to inability to free the cartilage completely to allow it to spring back to its natural position. The width of the nostril is flared on the affected side of   as the transverse nasalis, Levator labi superioris aleque nasi  musculature  and few fibres of the orbicularis oris have not been adequetly relieved of their abnormal or strained  attachments and reoriented in to their natural position.  All of these leads to difficulty of breathing as well as an external unesthetic appearance.

The challenge for the cleft surgeon is not only to recreate anatomy, but bring about functional harmony  of the face

The technique to correct this is deformity is a standard surgical procedure called Rhinoplasty (Also called nose reshaping or nose job). This is a simple procedure done to realign the central septal cartilage, and also, other   supporting structures like, the nasal bone and its accompanying smaller cartilages in order to have a straight and pleasing nose without   any breathing difficulties

In all instances, a detailed evaluation of the problem has to be performed , which includes both a clinical examination as well as necessary x-rays. In addition photographs of the concerned areas are taken both for record keeping as well as planning the surgical procedure. The planning can be done using computer soft ware, which allows us to predict the possible changes for that particular patient keeping esthetics and harmony as the corner stone. Interestingly beauty and harmony in nature is based on a scientific principle called Golden proportion. This means all components of nature have a definite proportional relationship with its whole.

It is interesting to note both in normal as well as cleft patients, a small chin often gives the appearance of a large nose. Patients concerned with    the nose appearing relatively larger fail to realize that the principles of the golden proportion is the key to deciding their facial balance. Restoring a small chin to its correct size and shape makes a dramatic impact on the facial balance when combined with a nose job. 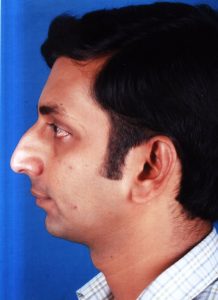 Rhinoplasty can be accomplished in two ways. In the first method, the entire procedure is performed from inside the nose such that there are no visible scars on the out side. This is called a closed rhinoplasty.  When more complex deformities of the nose have to be corrected, a small additional incision is placed on the columella (structure dividing right and left nostril) along with the standard internal (hidden) incisions allowing the surgeon to open up and visualize all the structures of the nose directly in order to correct them precisely.

•Reconstruction of the Facial Muscle Rings

•Reconstruction of the Pyriform Rim

•Management of the Septum

•Repositioning/Reconstruction of the Alar Cartilages

•Reconstruction of the Nasal Dome 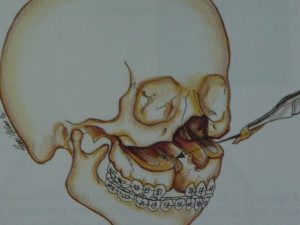 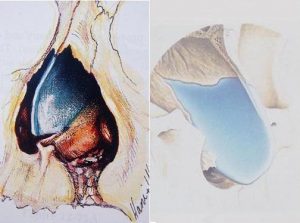 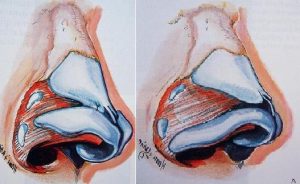 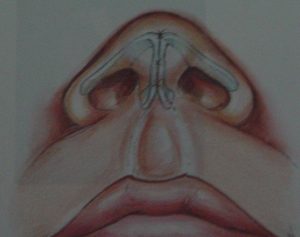 The procedure is performed under general anesthesia and is, a day care procedure where in the patient can go home in the evening after the operation. By evening, the patient generally is very comfortable and is able to eat normally. There will be a small plaster placed over the bridge of the nose as a protective device for a period of one week until healing is complete. Also on the day of the operation a small pack (medicated gauze) will be inserted in to the nostril for one night and removed the next morning.

Following the surgery, there will be a slight swelling, occasionally some bruising (discoloration) around the nose and neighboring areas. This will subside by 80% at the end of the first week .At this stage; the patient may resume normal activities. It will take at least 4 weeks for complete healing to take place after which, the patient can resume physical activities like sports etc. Following this, healing continues to take place in a subtle fashion over the next several months until the final definitive result is achieved by around 6 months.

Unlike the problem that have described above, a common complaint is that the nose is too small or the bridge of the nose is not well defined at all. After careful assessment, it is possible to ascertain the cause of the flattening of the nose. Very often, a deficient nasal septum does not allow the bridge of the nose to stand prominently. In other instances, the shape of the nose is inherited with no defect in the septum. There are two ways to build up the bridge of the nose and give it a straight fine finish with a nice pointed tip. The procedure is called augmentation rhinoplasty and involves the insertion of either material taken from the patient (rib cartilage)or the use of synthetic international standardized implants made of silicon etc. These implants are available indifferent sizes and have a precise machine finish and can thus be selected exactly according to the patient’s needs. The post operative care and sequel is similar to the previously described procedure.

Ideally, there is a careful selection criteria on whom a successful Rhinoplasty can be performed.

ILLUSTRATION OF THE PROCEDURE 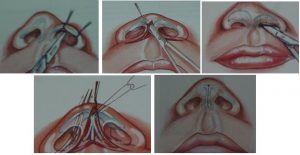