The team is not only capable of performing surgery on delicate skull bones and face, but also in alleviating associated facial defects (lips, noses palates, eyes and ears, among others).

The organisation has operated on 600 craniofacial procedures.

Nature though in essence, the epitome of perfection, sometimes manifests with subtle or gross imperfections in its creation.

Birth defects affecting the size and shape of the skull, the structure of the face and its organs like nose, ears and eyes are called Craniofacial anomalies.

The commonest Craniofacial anomaly is the all prevalent Cleft lip and Palate, which in India occurs in one in every 700 children born. This means about 40,000 Clefts are born in India alone.

Fortunately, with a structured, Protocol driven team approach, it is possible to provide excellent results to these babies by the time they reach adulthood.

The more complex deformities occur rarely in smaller numbers, but yet significant enough in a population as large as India.

The commonest of these is called Hemifacial or Craniofacial Microsomia and affects one part of the face, including the jaw bone and the external ear.

The other common facial anomalies are the Pierre Robin Sequence and the Treacher Collins Syndrome, both of which present with a extremely small lower jaw, difficulty in breathing and need immediate attention in terms of extending the length of the lower jaw.

The modern techniques of Distraction osteogenesis allows us to grow the bone 1mm per day right from the day of birth itself.

Deformities involving the skull are extremely complex and could both be merely cosmetic or seriously functional, putting pressure on the brain and its growth. Several variations of the skull deformities exist , often with coexisting facial and defects in other parts of the body.

The management of all the above defects require highly technical skill and knowledge acquired over several years , these skills involve not only the ability to perform surgery on the young and delicate bones of the skull and the face , but also the ability to reconstruct the associated facial defects , which can include organs like lip nose palate, eyes . ears and the orbit.

The ideal surgeon would be one who is trained in both Medicine and Dentistry with his strong medical background in general surgery, neurosurgery, maxillofacial surgery and the techniques of Plastic surgery.

Such skills exist in an extremely small population across the world, about 6 in India and barely a 100, across the globe. 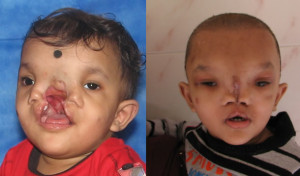